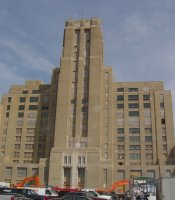 June 13, 2005 - Viking Automatic Sprinkler Company is currently working on the Midtown Exchange project - on the corner of Lake Street and Chicago Avenue in South Minneapolis.

Midtown Exchange, formerly known as the Sears Building, is a one million square foot renovation project and is one of the largest projects in the state, second only to the Mall of America.

The building has been a landmark since 1928. It was occupied as a Sears retail store and main warehouse from 1928 until the mid 1980s. The historic building has been vacant for the last 20 years, but the massive concrete structure and building exterior stayed in remarkably good condition during this time.

Viking Automatic Sprinkler Company was contracted, by Ryan Companies US. Inc., to install several new systems throughout the facility, including a fire pump, six standpipes, and close to 10,000 sprinklers. In addition a new 75,000 square foot parking structure is being built with eight additional standpipes and 650 sprinklers.

When complete in the fall of 2005 the site will be home to a variety of tenants including: