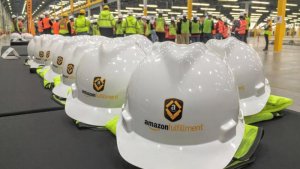 In July 2015, Viking Automatic Sprinkler Co.'s St. Paul branch was awarded the Amazon MSP-1 Project located in Shakopee, Minn. The scope of the 2.4 million square feet project consisted of 72 systems, totaling close to 24,000 sprinkler heads, making it one of the largest projects Viking has been a part of to date.

"Each day at Amazon, the amount of pipe installed would be compared to a week on past projects." - Pat Kes, Foreman, Viking Automatic Sprinkler Co.

With the first system of pipe having been delivered October 28, 2015, and final testing wrapping up in early May of this year, it was a very fast paced project. Over a two-month span, when the field was at its peak of 17 sprinkler fitters, there was, on average, a system being delivered and installed each day. Viking has also been awarded the conveyor portion of the project, and is now in the process of installation.

Amazon has begun filling more than 1,000 full-time employee positions and packing its aisles and aisles of tall shelves with products. Hundreds of little orange robots that resemble heavier and bigger versions of Roombas will be humming along the floor fetching items for employees to pack and send to customers.

Only about 13 of Amazon's dozens of fulfillment centers in the U.S. use robots, which weigh about 320 pounds each and can lift up to 750 pounds, Amazon executives said.

"This technology will work side by side with associates to make a symphony of people and machines working side by side," said Michael Feldman, a principal engineer in Amazon's fulfillment division.

"The robots help Amazon operate the warehouses much more efficiently," said Brian Urkiel, who currently is general manager of Amazon's closest fulfillment center in Kenosha, Wis., and will be general manager of the one in Shakopee.

The Shakopee center is part of Amazon's push to offer faster service in the Twin Cities. One section has two floors. Another, four floors. The center will feed packages to other Amazon facilities, where they'll be routed for delivery to customers. After the center is in operation, the company will offer public tours.​​